Written by dbux on September 2, 2020. Posted in General, Reports 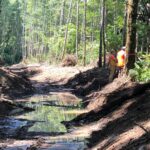 Phase 2 of the Middle Slough Restoration Project continues restoration efforts upstream in the slough connecting them to sections restored in Phase 1.  These restored sections serve as holding and rearing habitat for salmon and steelhead and provide cool water, food and refuge from predators.  The project located on property owned by the US Bureau of Land Management also includes upslope planting of willows, trees and other plants.  Phase 2 is funded by the CA Department of Fish and Wildlife and the CA Department of Water Resources.  The Mattole Salmon Group is the lead for this work with critical assistance from these partners:  Mattole Restoration Council, Native Ecosystems, Edwards Excavation and Restoration, Mike Love and Associates, and the North Coast Resource Partnership. 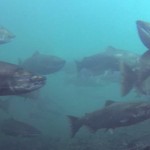