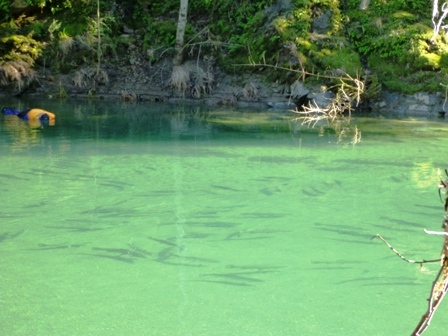 Mattole River steelhead are a part of the Northern California Evolutionary Significant Unit (NC ESU), which includes both winter and summer steelhead. NOAA Fisheries listed NC steelhead as threatened under the Endangered Species Act in 2000 and re-affirmed the listing in 2006.

Present data indicates population abundances of steelhead in northern California are very low relative to historical estimates (Busby et al. 1996). This is especially true in the case of summer steelhead, which are particularly susceptible to freshwater habitat deterioration due to sedimentation and land use practices. 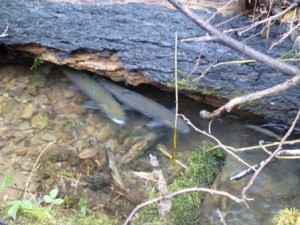 This species can be full time residents in streams (considered as trout) or anadromous (ocean going, with part of their life history spent in freshwater). Anadromous steelhead are much more complex than salmon in terms of life history diversity.  Juvenile steelhead rear for 1-3 years in freshwater streams before smolting and migrating to the ocean. From there their life history diverges, including differing times of ocean residence, different run-timings, and different biological strategies. Steelhead may make several ocean migrations and spawn more than once (NOAA Steelhead Trout Page).

Winter steelhead (ocean-maturing) are sexually mature upon entering freshwater in fall or winter. They migrate upstream and spawn shortly thereafter in the winter and spring. Summer (stream-maturing) steelhead enter freshwater sexually immature and may reside in freshwater for up to several months before spawning.

MSG spawner survey and dive observations of steelhead provide evidence of different life history patterns among Mattole steelhead (SH). Most steelhead enter the river from November to April and spawn from late-December to May, with the peak of spawning activity believed to be in February and March. Infrequent observations of steelhead spawning in June have also been reported by MSG surveyors. Very small emergent SH fry have been observed by MSG divers in July and even August. 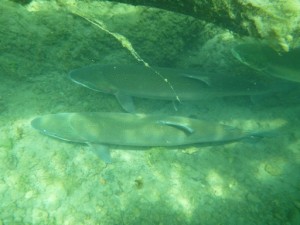 Mattole summer steelhead enter the river between March and June, then oversummer in deep, cold pools before spawning during the following late winter and spring.

The observed Mattole population is believed to be the southernmost summer steelhead population to inhabit a watershed without significant snowmelt during spring and summer (Carlos Garza, pers comm.). As the Mattole is located at or near the southern extent of the species, warmer water temperatures in the Mattole as well as limited habitat due to watershed disturbance threaten summer steelhead.