The Dives serve as an essential part of the MSG’s monitoring program as a whole. This annual event involves volunteers from throughout California and is the only time the Mattole Salmon Group surveys the entire river in the span of less than a week. For some of the more remote locations, this is the only time we survey all year. Divers snorkel in teams of two or more, surveying every part of their designated reach that is deep enough to get a mask under water. 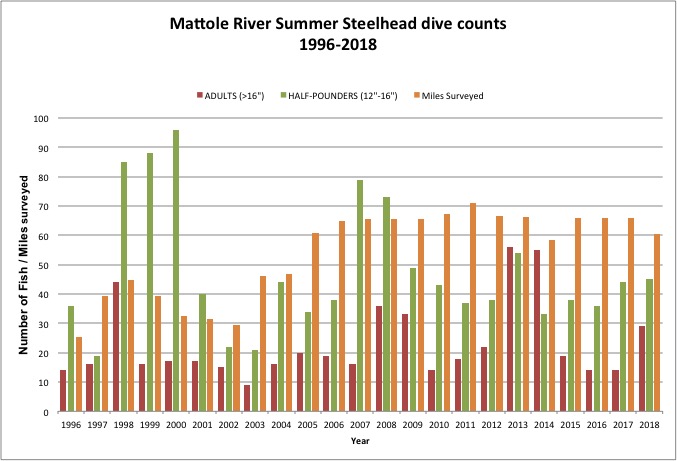 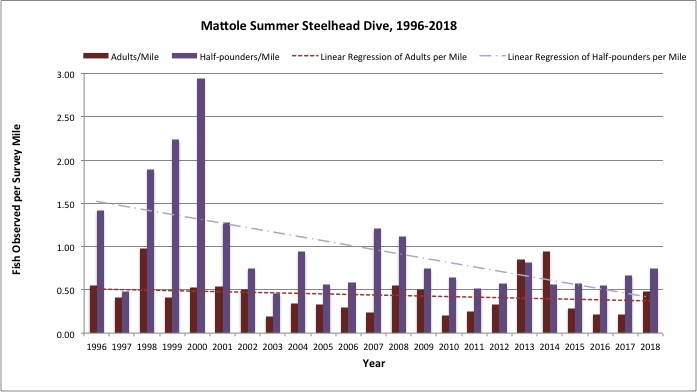 This opportunity brings together young and old alike to be the eyes and ears of the river, providing valuable information on both fish numbers and location, as well as habitat conditions in the summer, when temperature, one of the known limiting factors to salmonid abundance in our watershed, is near it’s peak.

In addition to monitoring larger size-class steelhead, divers also identify and enumerate juvenile coho and Chinook and map the distribution of all three species of juvenile salmonids. Baseline information on summer coho numbers and location gathered during the Summer Steelhead Dive is important for comparison to dives over the rest of the summer, as well as rescue and relocation efforts, such as the 2013 Baker Creek Project. Now that Mattole coho are at risk of extinction, efforts to monitor juvenile coho during the summer months are more critical than ever.

The Summer Steelhead Dive also allows us to map species distribution of other native and indicator riverine species, such as western pond turtles and freshwater mussels. We also map and note aquatic invasives to track their spread, including signal crayfish, bullfrogs (and bullfrog tadpoles), red-eared slider turtles, and striped bass, to name a few.

We depend on volunteers and donations from fish enthusiasts like you to make this annual event a reality. Please contact Michelle Dow to donate to the Summer Steelhead Dive or for more information on volunteering.

MSG Divers gather at A.W.Way during the 2014 Summer Steelhead Dive.