The Mattole River originates as a small stream in the King Range National Conservation Area. The Mattole travels north 62 river miles, unencumbered by dams, and is joined by 74 perennial tributaries, before it flows into the estuary, then enters the Pacific Ocean about 10 miles south of Cape Mendocino. 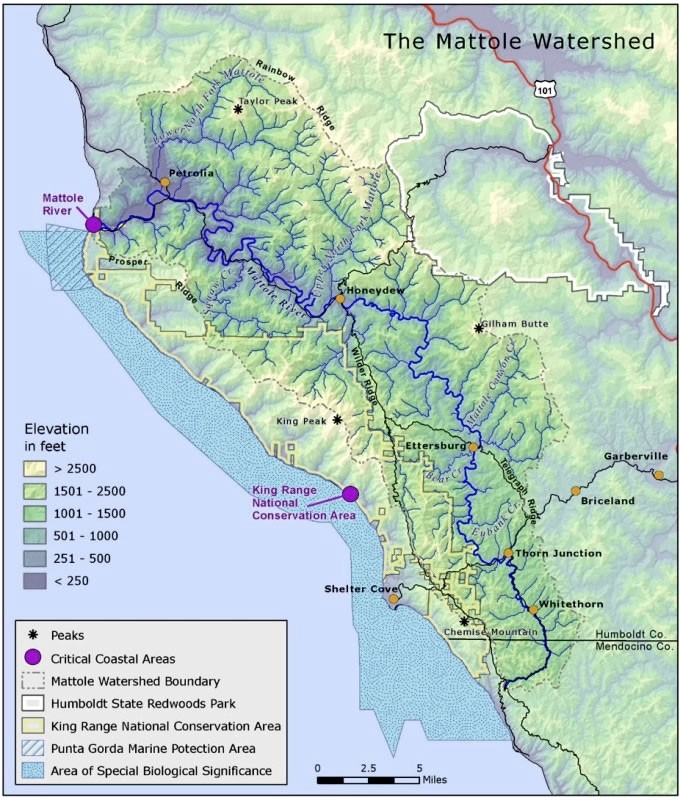 The Mattole Watershed lies in an area prone to intense geologic activity (the Mendocino Triple Junction), including several active fault zones. The last major tremors in April 1992 produced 3 earthquakes ranging from 6.9 to 7.2 Richter. Frequent seismic activity coupled with high averages of annual precipitation (up to 200”), with most occurring during the winter months, create make for high rates of natural disturbance.

Past land uses in the Mattole Watershed have compounded the impacts of natural instabilities. Timber was harvested throughout the watershed mostly after WWII; as of 1988 only 9% of old growth forest remained (MRC 1995). Subsequent to flood events in 1955 and 1964, the watershed experienced high rates of erosion and sediment deposition in the river channel, unknown prior to logging. Resultant high water temperatures and lack of adequate habitat have negatively impacted salmonid survival and abundance.

In 1960, USFWS estimated average annual runs in the Mattole were approximately 12,000 steelhead, 5,000 Chinook, and 2,000 coho. Current runs have been drastically reduced. All three Mattole salmonid species are listed as threatened under the Federal Endangered Species Act. Mattole Chinook and coho are also listed as threatened under the State of California Endangered Species Act.