MSG dive surveys have documented juvenile presence and distribution since 1991.

The goal of our long-term juvenile salmonid population and habitat monitoring program has been to quantify distribution and relative abundance of juvenile salmonids in relation to summertime water quality factors. 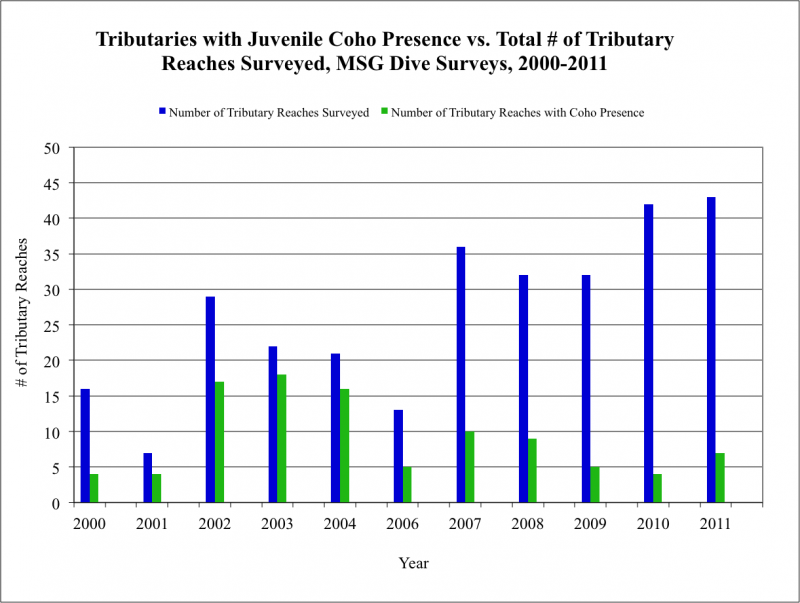 Despite increased juvenile dive survey efforts in 2007-2011, coho were observed in fewer and fewer tributaries as a percentage of tributaries and tributary reaches surveyed. (see figure above) (MRRP 2011). In 2010, observed coho juvenile distribution was the most restricted since annual dive summaries were initiated, with coho found in only two tributaries (consisting of four reaches) out of 21 tributaries (totaling 42 reaches) surveyed.

Juvenile dives in 2000-2011 not only documented the trend of fewer and fewer tributaries with coho presence, but also indicated a shrinking geographical distribution on a watershed-wide scale. Juvenile dives using the 10-pool protocol showed coho observations were increasingly isolated to the Mattole headwaters (upstream of RM 52.1).

In 2013, the MSG updated our juvenile dive survey protocol to a protocol recently adopted by DFW as part of their Coastal Monitoring Plan. Our goal in adopting this protocol is to better assess coho distribution throughout the watershed by using stratified random sampling. Units to be surveyed are pools that meet specific depth, temperature and (sometimes) cover requirements. Every other pool in a reach is snorkeled (double-pass with independent counts). Some reaches have 100+ pools, some have only a few. Pool dimensions are also measured and cover is quantified.

Survey reaches are the same as spawner survey reaches, which allows us to compare results of monitoring over multiple life stages.

In 2013, 23 main reaches and four tag reaches were surveyed. Coho were detected in eight of the 27 reaches surveyed (see map).Based on results from these dives, the diving done as part of the coho rescue and relocation project, and the Summer Steelhead dive, there appears to have been successful coho spawning in at least five streams/reaches in the winter of 2012/13 – lower Thompson Creek, Ancestor Creek, Baker Creek, the mainstem above Stanley Creek, and Squaw Creek.Coho seen in other reaches were likely non-natal migrants.

Also of interest was the incidence of Chinook detections in 2013. While over- summering Chinook juveniles have occasionally been sighted in the upper mainstem Mattole on summer surveys in past years, Chinook presence appeared far more widespread in 2013, with Chinook noted in 12 reaches. While they have not been abundant – usually just a few fish in a few pools – they have been seen in some surprising locations, such as disconnected pools in the lower reaches of Granny and Saunders Creeks, both very small streams <1 mi2 in drainage area.

Summer 2014 dive surveys for juvenile fish confirmed a restricted spawning distribution of steelhead, Chinook and coho. This year’s class of steelhead (which most years seem to be present in most every Mattole stream with flow equivalent to your kitchen faucet) were absent from the upper reaches of a handful of surveyed streams.

Coho salmon did make it into a handful of headwaters tributaries including Thompson, Yew, and Baker Creeks, and the mainstem Mattole nearly into Mendocino County. However, they didn’t seem to make it very far into these streams. In Baker Creek, where surveyors had seen three coho females on redds the first week of March, there were over 300 coho juveniles observed in summertime, but all in the first ~1000’ of stream, downstream from the county road and a small bedrock cascade that seemed to inhibit upstream movement.

In part due to the fact that coho did not spawn in the upper reaches of very small tributaries, most of the stream reaches where juvenile coho were observed were in little danger of drying up. However, the coho juveniles in Baker Creek seemed to make a bad choice and thumb their noses at the long-term weather forecast.

Streamflow at the mouth of Baker Creek went subsurface in late May, cutting off the option of dispersal to the mainstem. As the summer wore on and riffles dried up in this reach of Baker, we grew concerned that these fish might run out of water prior to fall rains.

MSG and Department of Fish and Wildlife staff captured and moved as many coho and steelhead as possible from this reach of Baker to Thompson Creek, on one day in August and again on September 11, when 92% of the channel length from the county road to Baker’s mouth was dry. This case highlights some of the complexities of low streamflows and potential responses to the problem. There is no human water use in Baker Creek, and there were upstream reaches of Baker that maintained some streamflow through the summer.

While the coho moved to Thompson Creek were saved from desiccation or predation in drying pools, they were already at a serious disadvantage for future survival. When first observed by divers in Baker Creek in June, they were small: no more than a couple inches long. As coho salmon parr grow they become territorial and develop a preference for deeper pools with overhead cover, but upon first-emergence from the gravel, they tend to school in shallow low-velocity areas. The fish in Baker, the product of spawning in early March nearly two months after typical coho spawning, did not reach the size at which they would naturally disperse until flows dropped to the point at which dispersal was impossible, leaving them crowded into rapidly shrinking habitat. In August and September, they appeared to have grown little if at all, still being shorter than your pinkie finger. They’d need to pack on the grams in the fall and winter to increase their chance of survival and return as adults. (Hopefully the generally warm stream temperatures we’ve seen thus far in the winter of 2014-15 have been helpful in this regard.)

In contrast, coho seen in most every other stream were larger. The largest coho observed were in reaches where coho juvenile rearing has only been documented very occasionally in the past: Bear Creek near Ettersburg, and the Mattole mainstem downstream of the Nooning Creek gorge and upstream of Ettersburg. It has been thought that these reaches, with summer water temps routinely approaching or in some cases exceeding 70° F, are too warm for coho summer rearing. The coho observed did seem to be using thermal refugia within these stream reaches, but appeared healthy and were clearly growing. Whether their presence was a quirk of spawning distribution limited by low water or simply occupation of suitable habitat is unclear. They may have been aided by relatively moderate summertime temperatures, and may not have fared so well in a hotter summer.

Generally, coho juveniles rear for just about a year in freshwater before smolting and heading to saltwater. However, sometimes they don’t. We observed a number of 1+ coho (fish over a year old) in Ancestor Creek and upper Baker Creek, reaches where coho densities were very high the summer of 2013. The reason for these fish “choosing” to stay in freshwater for an additional year is likely due to slow growth the previous year. With little or no spawning of steelhead or coho in these reaches in winter 2013-14, these fish had the pools almost all to themselves.