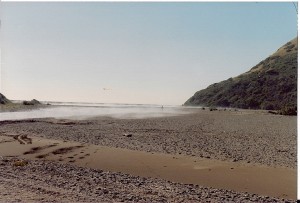 When the MSG formed, it was bent on reversing the decline of the Chinook and coho salmon in the river. Early work was with native stock enhancement using hatchboxes in the headwaters and investigations aimed at preventing the South Slough from in-filling. Each summer, thousands of juvenile Chinook over-summered in the estuary (Note: After the well-documented die-off of juvenile Chinook in the lagoon in summer-fall 1987, HSU graduate students did not find huge numbers of juveniles oversummering, leading to the conclusion that the rearing capacity of the lagoon was considerably reduced from the early 1980s.) and the South Slough was teeming with them. As the slough became shallower and cut off from the mainstem of the estuary, it was unavailable to these fish.

Humboldt State University’s Cooperative Fisheries Research Unit studied the estuary in 1986 and 1987 (Natural Resources of the Mattole River Estuary, California, Busby et al., 1988 – https://www.krisweb.com/biblio/mattole_blm_busbyetal_1988_estinv.pdf) and found that the estuary was extremely shallow in depth (from a minimum of 0.1m to a maximum of 4m – with much of it merely ankle deep and temperatures lethal to juvenile salmonids (maximum ranging from 17 to 23 degrees C). From the work of Reimers (1978) which found that juvenile Chinook that over-summered in the estuary were far more likely to return as spawning adults, it was clear that the Mattole estuary was a bottleneck for Chinook. 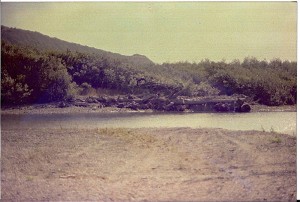 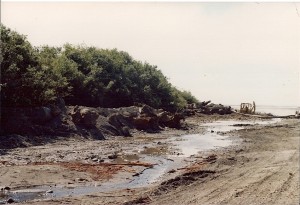 MSG had proposed dredging the South Slough, then located along the ocean berm, in the early 1980s. (Note: The thalweg of the lower mainstem at the Dogleg jumped from south to north after the 1982-83 winter, contributing to the inaccessibility and infilling of the South Slough.) But at that time, the project was considered too radical an alteration of the natural environment and was not implemented. What followed were various projects to mitigate for the lack of suitable habitat for the over-summering fish. In 1989, MSG pioneered the Estuary Floating Shade and Cover Structures which the juvenile fish flocked to immediately upon placement. The following year, we built 2 log revetment structures on the South Bank and along the North Bank. The purpose was to provide scour and habitat complexity in the hostile aquatic environment. The South Bank structures were still in place as late as 2010 (photo) and most of the North Bank structures are in place today.

Along with structures, MSG conducted riparian plantings from 1986 through 1994.

During this time, MSG convened a meeting with the California Department of Fish and Game, Coastal Conservancy and the USDA Redwood Sciences Laboratory to propose studying the Mattole estuary and developing a plan to restore aquatic function to that bottleneck for Chinook as well as coho. Funding was provided to the Mattole Restoration Council to complete the study, Dynamics of Recovery, 1995   https://www.krisweb.com/biblio/mattole_mrc_xxxx_1985_dynamicsrecov.pdf

Included in Dynamics was a plan to place more log and rock anchored structures in the estuary but to build them larger and heavier and closer to the high-energy flows so that they would scour deeper and provide better habitat. 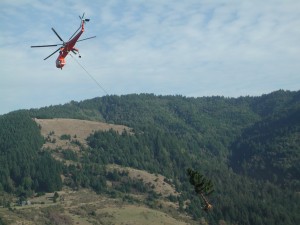 A helicopter has several key advantages and disadvantages for wood placement in river systems.  Advantages are the scale of operation and intact, whole trees can be used.  Disadvantages of helicopter use include cost, complexity and additional challenges.  The Mattole Salmon Group chose to pursue the use of a helicopter for wood placement with the encouragement of our technical advisory comittee.  With seven large wood structures downstream in the estuary, whole trees might hang up and or create their own jams and island building structures.  The idea is to give the river the tools it needs to build structures and let the rivers dynamics do the work.

The placement of 100 whole trees took place between September and November 2013. A helicopter was used to place trees to conserve as much branch and root wad complexity as possible. All areas disturbed in the process of tree removal were planted and mulched.

A monitoring program was set up in which each trees has an individual identifying scannable tag.  These tags are scanned and each trees location is mapped.  This way locations and movement of the trees can be tracked. 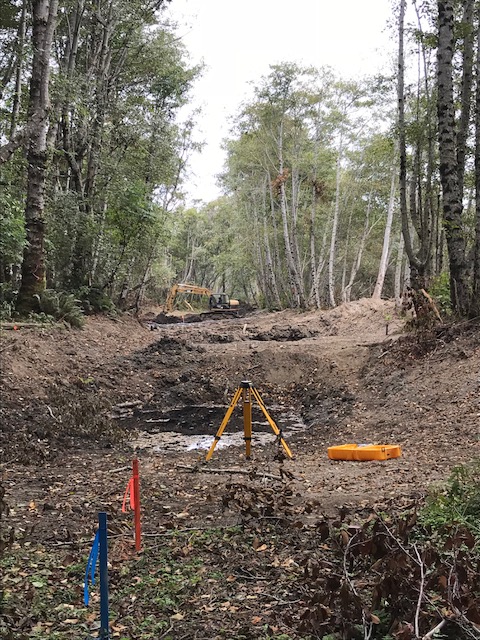 While the estuary gained depth, complexity and improved conditions for juvenile salmonids from the late 1990s on, the South Slough never regained connection with the river. The habitat determined so beneficial to salmonids which pass through the estuary was still not present. It became evident in the late 1990s that when in 1974 the tributaries that drained the south valley wall (Stansberry and Lower Bear Creeks) were channelized and directed into the mainstem, the South Slough was deprived of flushing flows which could have maintained its connection with the estuary. Further complicating connection, the South Slough (and the entire estuary area) had been elevated by the 1992 earthquakes, perhaps close to 1m. MSG began investigations to get Lower Bear back into its pre-1974 channel, but to lead it through the riparian terrace to a remnant slough just upstream of the old South Slough. Further investigation showed that one could work at both ends of that system, and in 2014, 250 linear feet were excavated at the confluence of the slough and the mainstem. Shortly following completion, 4 adult Summer Steelhead were found to use the new habitat – an indication that it provided preferred off-channel habitat for the dominant anadromous species. In 2018, an additional 250 linear feet were excavated. 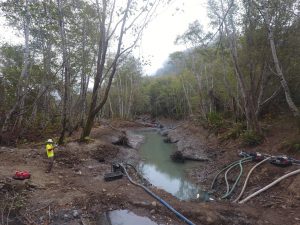 MSG’s Estuary Structure #7 project consisted of one complex Large Woody Debris (LWD) structure and three apex jam structures, constructed in August of 2011. These wood structures, funded by USFWS, are part of an on-going effort to restore habitat conditions in the Mattole River Estuary. Each of the seven complex LWD structures are intended to be minimally mobilized and thus are anchored to the boulder complexes. These structures are intended to provide a minimal base line of habitat in a diverse range of areas (north bank, south bank, and at various distances from the ocean) and allow for fish use during different seasons, weather conditions and river flows.

The apex jams placed during summer 2011 brought the total apex jam numbers to 6 in the lower estuary. Upon completion of structure 7, the MSG had placed a total of 151 logs  from all of our large wood restoration projects in the estuary over the last 10 years. 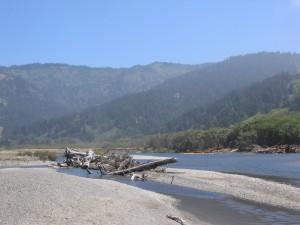 In August of 2010, the MSG constructed two complex LWD structures and four apex jam structures on the north bank of the river. The Estuary Structure #5 and 6 project was funded by EPA and USFWS. The jams were unanchored and constructed by using a minimum of four large pieces of wood each (40+ foot long pieces with root-wads). The root-wads were placed up-stream and the body of the log was buried downstream. 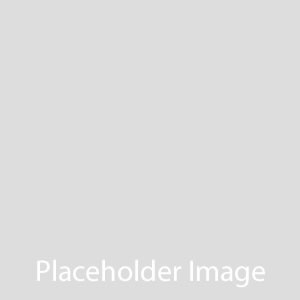